Este sistema se cae si tú no comprai.
(This system will crumble if you don’t buy)

Printed with love in Berlin by „Druckbar Wedding“ in 2 versions.

A system only exists because of the participation of many, just as a king is only a king because people believe that he is.

If people stop participating, the system is doomed to collapse.
And this is of vital importance when we’re talking about a system which is based on exploitation, domination and discrimination.

The verse is part of the „Antifa Dance“ by Ana Tijoux.

„Antifa“, a concept which is often reduced to left terrorism, really means nothing else but „antifascist“. As Ana says:
„Internacionalista, anti-colonialista, contra dominación, antifa-antifascista.“

Despite the „anti-„ in the word, it’s a deeply positive concept, a concept of freedom, equality and solidarity.
What the „anti“ implies is that those values have to be fought for because we don’t live in an ideal world. Thus, „peace“ is an ideal which has to be achieved.
And by that, I don’t mean throwing bricks and smashing heads, but music, art, ideas & discourse. And this is also the idea of a Dance against Fascism.

I love this song, there’s an incredible power in it. I deeply support Ana’s message, and this is why I decided to let this message be my first print.

There are no reviews yet. 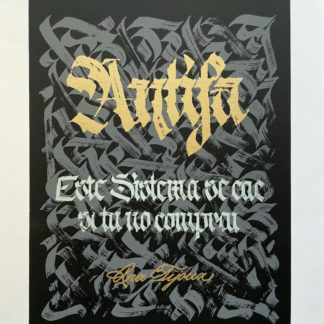